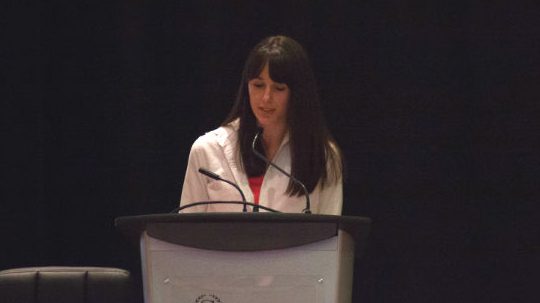 CHANDLER, Arizona – The following transcript is from a speech delivered by Lauren Derse, daughter of Founder & CEO Sharon DiMinico at the 2017 Learning Express Convention at the Sheraton Wild Horse Pass in Chandler, AZ.

It all started in 1982. Mom, pregnant for the first time, was shopping for my nursery furniture and baby gear at several stores in Nashua, NH. She tells me that it was a very emotional shopping trip. Purchasing toys, a crib, strollers, and bassinets for her child was both fun and heartwarming. As she checked out, she daydreamed about setting up the perfect nursery and engaging her child with the educational toys she had just selected. Her fantasy was cut short when the cashier announced the total of her purchase: $2,700. The experience my mom had shopping for her child was so fun and rewarding that she neglected to look at a single price tag. The seed was planted. She would look to sell her retail tile business and start a new venture, one that would capture the emotion and fun she just had shopping for her first child.

4 years later, in 1986, finding educational and fun toys was a challenge for my mother, who now shopped for both me and my younger brother, Michael, age 3. Big box stores, known as “category killers”, were at the height of their popularity, but Child World and Toys R Us’s aisles of black and pink didn’t inspire her. Around this time, my mother stumbled upon the Early Learning Center. It was an educational toy and teaching supply store. The shop carried interesting toys, but Mom wasn’t wowed by the presentation. Here was her next opportunity, one that sprung from the seed planted 4 years earlier. She would create a toy store that parents would not only trust to have the best assortment of toys but also enjoy the shopping experience itself through superior merchandising and customer service.

Mom took Michael and me to every toy store from Southern Maine to Connecticut, armed with a notebook and her two toy testers. She kept a journal of what she liked about each store and also the retail experiences that she felt needed improvement. After documenting her thoughts, she wrote a business plan and set out to find a location.

Even though raising two children and starting a business would have been enough to keep several people busy, Mom was also president of the board at my preschool, which was in the middle of a financial crisis in 1987. Teachers were leaving, and the school needed to raise additional funds or risk closure. During a fateful board meeting, my mother presented her business plan as the fundraiser that would stabilize the school’s finances. A few months later, Acton, MA became the first Learning Express location in March of 1987.

In September, 6 months later, my mother opened her first solely-owned location in Needham, MA. While getting the Needham store ready to open, my mom happened upon an article in Inc. Magazine about franchising. Knowing how rewarding business ownership was, she felt that franchising would be a fantastic way to grow the business while giving other families the same satisfaction she felt as her own boss. She brought her Operations Manual to the Head of the Entrepreneurship Program at Boston College to get advice on crafting a franchise business model. After reviewing the manuals, the professor not-so-politely advised my mother to invest her money elsewhere. In fact, most people my mom shared her plan with were not supportive. But she believed in Learning Express. And once my mother’s mind was set on something, nothing would stop her. She placed an ad in the Boston Globe for toy store franchising opportunities, and Chip Will from Andover, MA answered. The rest is history.