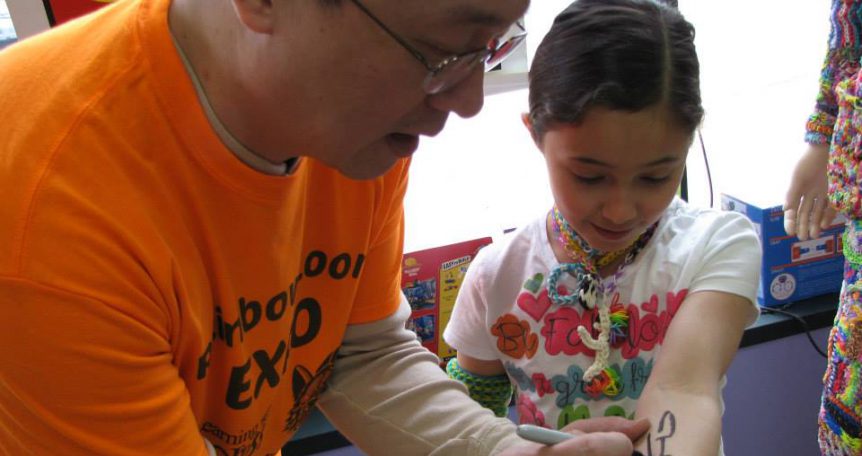 On a blustery March day in Chicago, thousands of children were working away inside the Allstate Arena making Rainbow Loom jewelry and figurines at the first ever Rainbow Loom Expo. This event was the result of a new partnership between the Chicago Wolves hockey team and Learning Express Toys. Families from all over the region gathered to celebrate their love of looming two hours prior to the Chicago Wolves vs. Grand Rapids Griffins hockey game.

The Rainbow Loom Expo was a fun and informative afternoon of entertainment and inspiration. Store owners and staff from six of Learning Express Toys’ Chicago area stores set up booths throughout the arena to teach a variety of Rainbow Loom designs. The experts worked one-on-one with children of all different ages and skill levels to create Wolves-colored bracelets and were thrilled to see some of the amazing creations that the kids brought with them. Children in the stands also joined in the fun by following bracelet tutorial videos, which were played on the jumbotron.

Die-hard Rainbow Loom fans had the opportunity to meet Choon Ng, inventor of the Rainbow

Loom and take pictures with the famous Jimmy Kimmel “Suit of the Loom,” which was purchased by Choon in support of the Max Love Project. Choon was busy throughout the event autographing everything from Rainbow Loom Kits, organizers, T-shirts, hats, and even children’s arms. Choon, his wife, and two daughter were spotted working behind the bracelet booths helping children perfect their designs!

Choon built the Rainbow Loom after watching his daughters make bracelets out of rubber bands. His creation has been Learning Express Toys’ hottest product for more than a year. The Rainbow Loom won four awards at the 2014 Toy of the Year Awards in New York City, including “Toy of the Year” and “Activity Toy of the Year.” The awards are regarded as the toy industry’s version of the Oscars.

Parents attending the Expo with their kids enjoyed hearing Choon’s incredible story and seeing the evolution of the Rainbow Loom in a separate section where each version of the loom and original Twistz Bandz prototypes were displayed in sequential order. Looming above all of the prototypes was a giant Rainbow Loom replica designed by a staff member from Learning Express Toys of Lake Zurich. Lake Zurich owner Rick Derr was instrumental in helping to organize the Rainbow Loom Expo and arranged for Choon and his family to attend the event. Choon visited Derr’s store and declared his giant Rainbow Loom to be the largest in the world!

Overall the Expo was a huge success and all parties involved were thrilled by the amazing turnout. The combination of teamwork and family fun led to a successful partnership for Learning Express Toys and the Chicago Wolves. Both organizations are compiling notes and will provide tips and guidelines for other franchisees hoping to execute a similar event with their local teams. Perhaps the Expo will be in your neighborhood soon!